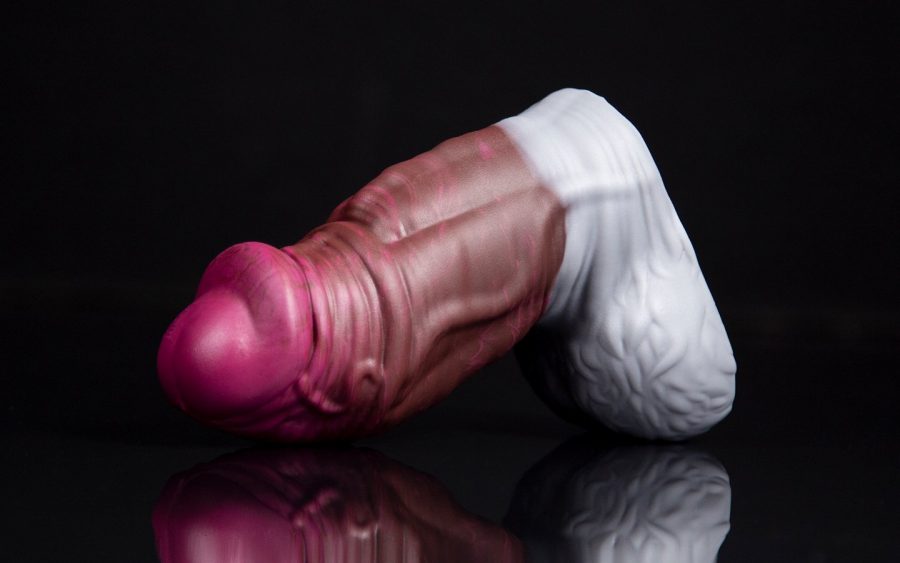 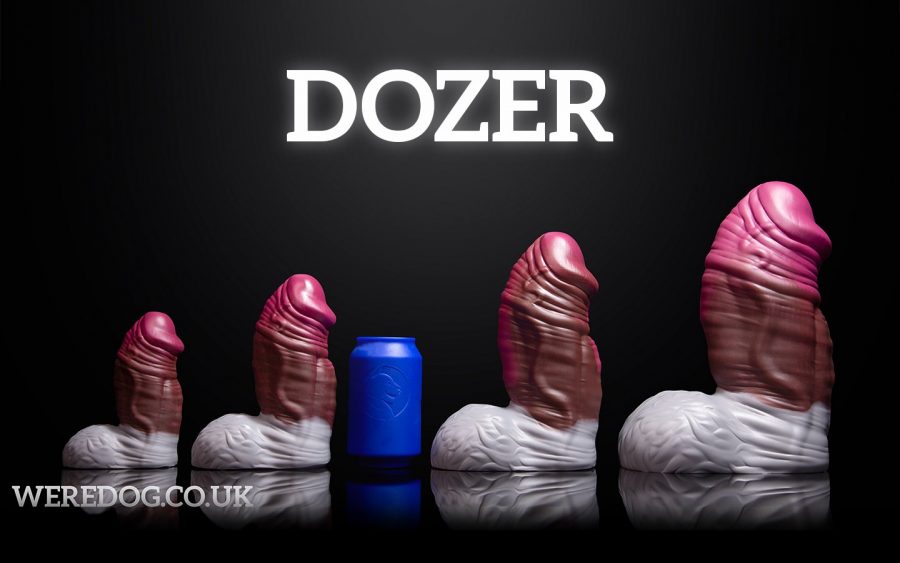 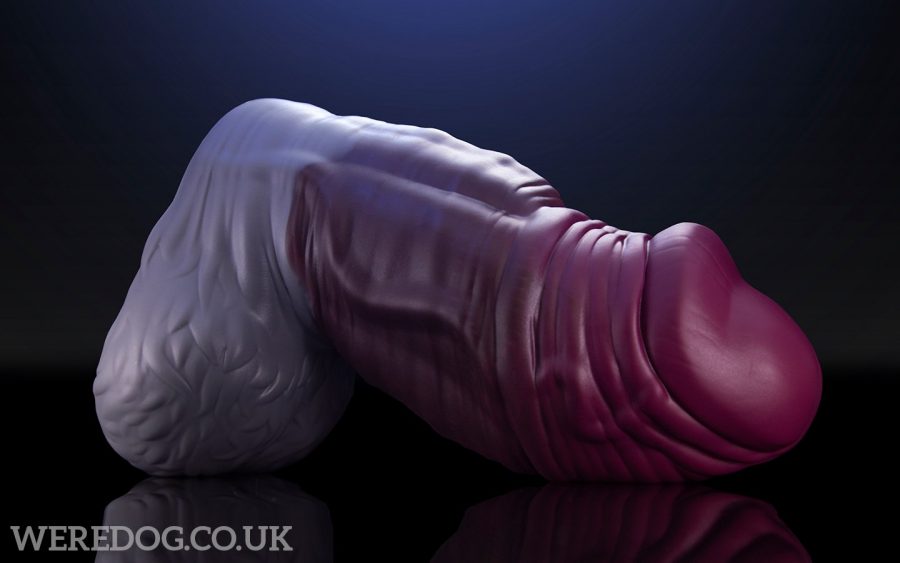 Get the Signature Edition! 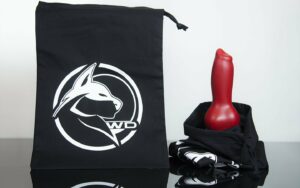 We dust all of our toys with cornstarch to help preserve their surface texture in transit - and they come in heat-sealed bags so they stay in the best condition possible!

We include a storage bag with EVERY toy, for free - to help keep it clean and safe. 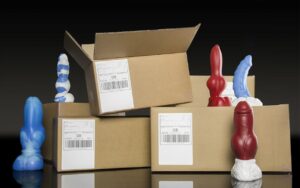 All of our orders, domestic or international, are shipped in a plain brown box with as little identifying information as possible. International orders will list all toys as "silicone sculpture" on any customs forms.

Made to be unabashedly fat, this rhino is no depth toy. Shorter than many of our other models, and thick from his head to his base, Dozer was designed to be as filling as possible – do not expect him to go easy!

If you choose to take him on, you’ve got gorgeous, wrinkled detailing to look forward to along his entire shaft, and a thick fuzz texture on his balls.

His small to XL sizes are already large, but this is the first model that we’ll be launching with an XXL size in pre-order; the thickest, heaviest creature we have ever cast for you guys. Those who accept his challenge, beware – he is not one for subtlety!

Dozer is provided with the following bag sizes:

Made to be unabashedly fat, this rhino is no depth toy. Shorter than many of our other models, and thick from his head to his base, Dozer was designed to be as filling as possible – do not expect him to go easy!

If you choose to take him on, you’ve got gorgeous, wrinkled detailing to look forward to along his entire shaft, and a thick fuzz texture on his balls.

His small to XL sizes are already large, but this is the first model that we’ll be launching with an XXL size in pre-order; the thickest, heaviest creature we have ever cast for you guys. Those who accept his challenge, beware – he is not one for subtlety!

Dozer is provided with the following bag sizes:

Get to know Dozer! 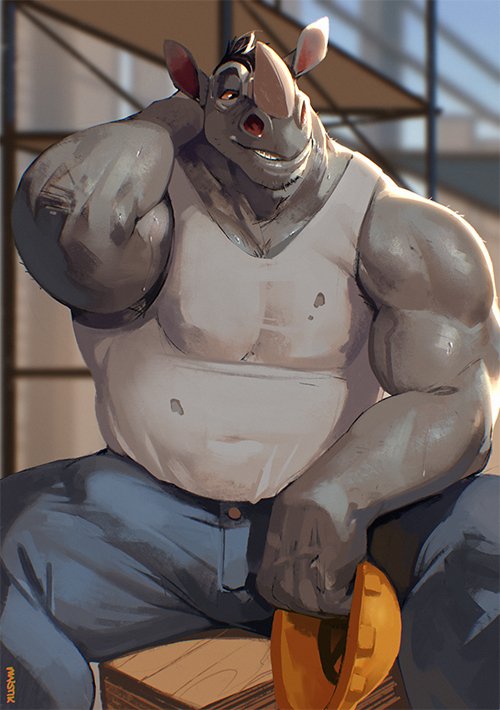 While office work carries few benefits, a third-story window seat has always been a perk. When you’re not being micromanaged into spreadsheets and reports, you can gaze to your left and see sunlight. Birds flutter across the vista, separated only by a few thin panes of glass. Trees stretch up into view, almost blinding in their green radiance. And across from all those is the site.

Technically the future home of Randall Holdings LLC, the site has been a source of entertainment that’s kept you going through the long, rainy winter and even rain-ier spring, and is now keeping you strong through the delightfully bright summer. Over that time, the stereotypes you’d had of the construction workers have mostly—mostly—been proven wrong.

Definitely not in the winter and spring, and even mostly not now in summer, the clothes have stayed on and ‘the gun show’ has been a myth. Instead, yellow visibility jackets and hard-hats hold dominion. The workers aren’t a uniformly muscled and manly group—there’s just as many dumpy electricians and slothful inspectors as logic tells you would be much more realistic. And you’ve yet to hear even a single cat-call. It’s as if daytime television had been lying to you all your life!

But while the illusion of manly displays have been a complete bust, it’s been an education in engineering to watch the building slowly take place. In place of the fantasy meat-market you’d imagined when the site had first entered construction, instead you’ve watched an unexpectedly intriguing deep-dive into the wonders of modern construction that you never expected to be so riveting. Hah. It’s a pun. You feel a momentary pang of guilt for that one.

Through the double-glazing, you hear a distant shouting. Ah. While most of your stereotypes have arrived as damp squibs, there’s at least one worker down there in the yard that knows exactly what your work-addled libido is hoping for, and he’s willing to provide. With his comically under-sized high-vis jacket attempting to announce its presence atop the monster’s shoulders, it looks more like a discarded tea-towel wrapped around his neck. Gray skin ripples over muscle, visible at the neck and the biceps while the rhino’s corporate-branded shirt struggles to contain the rest of his impressive stature.

“Log that as a close-call, and don’t let me catch you without your PPE again, Carl!” The rhino was shouting. He held a clipboard and struggled with a pen that looked like a toothpick between his thick fingers. “For fuck’s sake. I swear you assholes are trying to get yourself killed.”

It looked like it was going to be another care-free day for Dozer, the site safety officer. You smirk as you watch the scene, mind drifting from your work as you watch. For the whole afternoon, he seems to be ping-ponging from one violation to another. Anxiety and frustration bubble over near the end of the day, as Dozer escorts a particularly egregious health-and-safety danger from the site bodily.

The construction crew has mostly departed by the time you clock off for the evening, but Dozer is still logging the day’s near-disasters by the time you get down to the site. You poke your head around the wooden fence and call out.

“What?!” Dozer shouts, but when he sees your face, his hard-ass expression melts. “Oh, sorry. It’s been a long day.”

You shrug, then pull a hard hat he’d given you months back from your backpack and pop it onto your head. “Permission to enter the site, foreman?”

“I’m not—you can’t…” He fumbles for a moment, then throws his clipboard over his shoulder. “Fuck it. If everyone else is going to throw the rules away, I might as well enjoy the anarchy!”

Dozer looks around the now-abandoned site, then reaches one massive hand out to you. You sneak around the wooden fence and close the gate behind you. He wraps meaty fingers around your waist as you reach up and put hands around the horn rising from his snout. Those massive hands give you support as you pull yourself up for a kiss. Leathery lips brush your cheeks as he lifts you bodily from the ground.

A moment later, the two of you are in the cockpit of a crane. It’s not much privacy, but you were never kidding yourself that you were coming down here to be alone. You hold on to the dashboard as Dozer pulls you up into his lap. The cockpit slowly rotates as you lean left on a stick, and Dozer carefully pulls you away from the controls. You’re less concerned about how you might be making the crane turn and dip as you reach down between your legs and tug the zipper on the rhino’s jeans down.

How the denim is able to contain the monster that flops out between your thighs, you’ll never know. Dozer grunts behind you as you run your fingers over his girth. His fingers fumble at your waist, and you have to help him unbutton and slide down your work slacks. When he pulls you back into the nest of his lap, the smooth-skinned thickness gives a throb upwards between your legs, slapping your belly and leaving a smear of liquid on your shirt.

You push down to feel more of him, but he shushes into your ear and holds you up with one hand. “Safety first.” He mumbles, and you hear a soft crinkling. A wrapper flutters down to your feet. ‘XXXL - Your Size Condom” You reach down to help him roll it down his shaft, and as you do so you feel it thickening and stiffening between your fingers. He fishes something else out of his pocket, and plastic touches your fingers. A small pump bottle squirts some lube into your palm, and you stroke his length to spread it around.

Safety seen to, you’re pushed down across the crane’s controls as he bends you forward. Your fingers find a button, and blinking fills your vision as you enable the heavy machinery’s hazard lights while a blunt head smears between your legs. You let out a groan, which is matched by a warning beeping from the crane as you’re stretched wide. It took you weeks to work yourself up to taking him, but now you can’t satisfactorily end a work day without feeling the rhino sliding deep.

Ooooh, and deep he goes, thick and throbbing as he reaches over your shoulder. He disengages the safety-mandated warning lights and tone, then pins your arms to a part of the controls that can’t draw more attention to your fucking. His hips lift up off the cushioned seat and slap against your rump. His massive balls swing up and slap your belly as you feel him hilt. Well, he can stop you from hitting buttons, but he can’t stop you from drooling on the dashboard as he thrusts.

He grunts with each hump as he fills you. You were never going to last long with this kind of treatment, and you imagine that you’ve got to be tight around him, given how much effort it’s taking him just to push in with each thrust. You let out a groan into the unyielding control panel, and make a bit of a mess on the leather seat and the non-slip rubber floor of the cockpit. Your squeezing sets Dozer off in turn, and he holds himself lifted at an angle from the seat, hilted and pulsing inside you.

His long muzzle reaches down of your shoulder and he gives you a kiss. Hands grip your waist and pull you down with him as he sits back on the seat, giving both of you time to rest and come down from your peaks. Fingers push the safety helmet down onto your head, and with a ‘tut’, he helps you clasp the cord beneath your chin to make sure it doesn’t slip. “Almost fell off there. Remember, safety first.”

Story by Kandrel
Artwork by Mystik